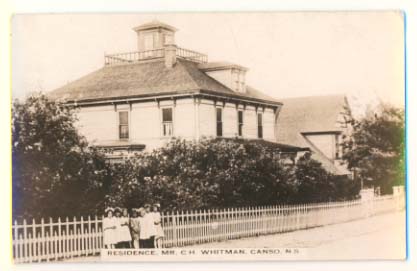 The name Canso comes from the Mi'kmaq word kamsok, meaning "opposite the lofty cliffs." Canso owes its very existence to the fishing industry. It was founded by Basque fishermen in 1604, and was officially incorporated as a town in 1901, with E.C. Whitman serving as the mayor. Its location at the end of the Canso Peninsula was advantageous in its founding, and for several centuries of catching and processing fish. Fortunes rose and fell with the bounty of the sea, and the final collapse of the Atlantic ground fishery at the end of the twentieth century could have sounded the last bell for Canso. No one counted on the spirit and fierce will to survive as a town and vibrant community, that is bred into such a "people of the sea", and Canso has fought back to retain its identity and keep its people. Men still go to sea here, and the current fish plant, run by Seafreez Foods Inc., operates some of the most modern, state of the art processing and freezing equipment in the world. New and different species are brought here for processing, and expanding markets worldwide keep this a viable company that is the employment base for eastern Guysborough County.

Canso was a cornerstone of the co-operative movement in the 1930's, and it is returning to the roots of this method of business, especially in the fishing industry, with the recent founding of the Canso Trawlermen's Co-operative. The usual amenities of town life are here - school, hospital and medical centre, bank, police station, garage, grocery and department stores, restaurants, and numerous other businesses offering most all the services you will need. A genuine edifice on Main Street, the Old Post Office is currently being renovated and restored to some of its former glory, and the Town Hall is always humming, with new projects being implemented to rejuvenate the town and its residents.

The Stan Rogers Folk Festival is held at Canso each July, drawing into this small area crowds of up to 10,000 visitors from local Nova Scotia, Canada, and the United States and Europe.


Canso and surrounding areas have many service and attractions for the travelling public. Services include high quality restaurants, service stations, laundromat facilities, a propane refilling station, several grocery and department stores, personal services (i.e. hairdressers, aesthetics), a motel, cottages and serviced and un-serviced camping sites. Canso and the nearby community of Little Dover both have spectacular coastal walking and hiking trails. Canso has an Olympic sized outdoor swimming pool and a well equiped sports complex. Canso, Little Dover and nearby Fox Island have great ocean beaches. If you are planning a trip and require specific information, please do not hesitate to call our local tourist bureau at (902) 366-2170. During the off-season, please feel free to call the Municipal Office at (902) 366-2525.

The society's mission is to preserve, develop and identify the historic tradition and culture of the people of the Town of Canso and surrounding area.

The Society operates the Whitman House Museum, with exhibits from Canso town and area. You will get a bird's-eye view of the town from the 'widow's walk' on the rooftop of the museum. Displays include panoramas of Canso by folk artist Mel Schrader, period furniture, photographs and other memorabilia.