HISTORY OF THE WHITMAN FAMILY

In 1749, to encourage new settlers, particularly Germans and Swiss, the British government and the Governor of Nova Scotia, Canada issued a Proclamation which was posted in Rotterdam, Netherlands, inviting German Protestants to settle in Nova Scotia. The Proclamation promised that each settler would be given fifty acres of land, and his wife and each child would also be given ten acres each. The British Government advanced them their fare, which had to be repaid.

In response to this program, several thousand, mostly German, immigrants arrived in Nova Scotia between 1750 and 1753. These immigrants came to be known as the Foreign Protestants who, shortly after their arrival in Halifax, settled in nearby Lunenburg County. Most could neither speak, read nor write English. Because most of the English could not speak German, many of the German words and names were misspelled or changed. For example, the German word for "German" is "Deutsche" which the English mispronounced and spelled as Dutch. This caused confusion and some records concerning the immigrants to reflect their nationality as Dutch, not German.

One day in July 1752, eighty-five Protestant families, perhaps three hundred men, women, and children crowded onto a ship called the Pearl and set sail for Halifax, Nova Scotia, Canada. On board and apparently traveling alone was an 18-year-old whose name was Valentine Witteman (later spelled Wittman). On the Pearl passenger list he is listed as a farmer from Osthoven which is located in the Rhineland-Pfalz (formerly Palatinate) area of Germany. The Pearl sailed from Rotterdam, Netherlands on July 10, 1752, arrived in Halifax on August 22, 1752, and the passengers disembarked on September 5, 1752. As was typical in those days some of the passengers died en route and were buried at sea. For public health reasons, all passengers on such ships were held on board for two weeks before they were allowed to go ashore. Valentine most likely spent the winter of 1752-1753 in Halifax. In 1753, the Government moved 1,600 Foreign Protestants, including Valentine, to Malagash Bay (now Lunenburg Bay).

It is ironic to think that 180 years later, his great great grandson, (my father), and my mother would make a 2,000 mile pilgrimage of their own, enticed by free Government land. But that chapter of this history comes later.

We do know that on February 15, 1757, he married Maria Eva Binter in St. John's Anglican Church, Lunenburg. Maria Eva had arrived in Halifax in 1752 from Palatinate, Germany with her mother (Catherine Barbara), stepfather (Johann Baptist Bachman) and siblings on the ship Gale. Maria Eva was born in Germany before 1742, probably in 1740. We know this because she had a younger sister who was born in 1742. Maria Eva died March 22, 1786, in Lunenburg. Valentine and Maria Eva had nine children and sixty-four grandchildren. Their children were: Valentine b-1758, Elizabeth (Sevilla) Catherine b-1760, Catherine b-1763, Mary Elizabeth b-1766, Sophia b-1768, Elizabeth b-1771, Peter b-1775, Leonard b-1777, and Johannes (John) b-1779. The births and baptisms of the first five children were recorded in the records of the St. John's Anglican Church of Lunenburg. The family apparently joined the Dutch Reformed Church, Lunenburg between 1768 and 1771 because the last four children, including my great great grandfather Leonard Whitman (spelled Wittman), were baptized there.

Leonard Whitman was born April 23, 1777, in Lunenburg. He died August 5, 1857, in Beaver Harbour, Halifax County, Nova Scotia, Canada. Leonard was not quite nine years old when his mother died. He no doubt worked on his father's farm for many years. As most farmers in the Lunenburg area did, the family took their produce by boat to sell in Halifax and often sailed farther up the eastern shore to Beaver Harbour and similar towns to fish and trade. This area was largely unsettled, so land grants were available. He moved to Beaver Harbour with his wife and infant son in 1807. My best guess is that he started a career as a seaman or fisherman. He lived the rest of his life in Beaver Harbour.

Philip Whitman was born May 5, 1810, in Beaver Harbour, Halifax County, Nova Scotia, Canada. He died October 17, 1886, in Beaver Harbour. By his generation, the English spelling of "Whitman" had been adopted. He and his wife, Sophia, are the ones that first owned the Family Bible that is in my custody today. As far as I have been able to determine, he spent his entire life in the Beaver Harbour area. Like his father, he probably worked as a seaman or fisherman.

Philip married Sophia Hawbolt December 29, 1841, in Beaver Harbour. Sophia was the third child of John George Hawbolt b-1790 and Elizabeth Winters b-1797. Sophia was born November 10, 1822, in Beaver Harbour, and she died July 16, 1905, in Beaver Harbour. I have traced this branch of our family back to 1679 Germany. Philip and Sophia had seven children and perhaps twenty grandchildren. Their children were: Samuel b-1843, Alfered b-1846, Levi b-1850, Charles b-1853, James b-1856, George b-1859, Mary Elizabeth b-1863. My grandfather, James Whitman, was their fifth child. Sadly, I noted that his older brother Charles, and his younger brother George, died in childhood within weeks of each other in 1862. I assume it was an epidemic of some kind.

James Whitman was born May 26, 1856, in Beaver Harbour, Halifax County, Nova Scotia, Canada. I believe he died in 1926, in Boston, Massachusetts. He spent most of his life in Beaver Harbour. Like his father and grandfather, I am sure he was a mariner in one way or another. He married into money. His wife's family owned and operated a shipyard in Spry Bay, Halifax County, Nova Scotia and were quite well off. It was probably a job offer as an officer on sea-going ships that caused my grandfather, at the age of fifty or so, to immigrate to the United States with his wife and three children. They relocated to Boston, Massachusetts in the 1904 to 1906 time frame. From this point on, most of his time was spent at sea and only occasionally did he spend time with his family.

James married Emily Matilda Leslie February 19, 1885, in Spry Bay, Halifax County, Nova Scotia, Canada. Her maiden name is the source of middle names for my father and me and my oldest daughter's first name. The Leslies were descendants of Marcus Gottfried Leslie (spelled Lassle) who arrived in Halifax in 1751on the ship Gale, listed as a 22-year-old carpenter from Wurttemberg, Germany. Marcus married Anna Barbara Rempin in Halifax at St. Paul's church in 1752 before moving to Lunenburg in 1753. It was their grandchildren who settled Spry Bay. Emily was the sixth child of Captian William Gasper Leslie b-1828 and Mary Ann Boutlier b-1825. Emily was born January 3, 1863, in Spry Bay and died March 3, 1957, in Casper, Wyoming. James and Emily had three children and nine grandchildren. Their children were: Mary Lillian b-1887, Annie Myrtle b-1889, and James Leslie b-1898. My father, James Leslie, was their youngest child.

On September 6, 1916, while at sea, he and the rest of the crew on his ship were advised that they were being drafted into the U.S. Coast Guard. One year later on September 5, 1917, he was discharged and immediately joined the U.S. Navy on September 27, 1917. He served in the Navy until September 22, 1919. After the War, and throughout the 1920's, he continued his career as a sailor, and he had the tattoos up and down his arms to prove it. Also, at some point he was a Ship Pilot for the Boston Harbor Authority.

My mother, Margaret Theresa Brown, was born January 6, 1906, in Worcester, Massachusetts. She died February 17, 1979, in Casper, Wyoming. She was the daughter of Henry Brown who had immigrated to the U.S. from Scotland, and Catherine Beird who came from County Cork, Ireland. My mother's family moved to the Boston area where she grew up.

To understand how my mother and father ended up in Wyoming, we must back this story up to the year 1919. This is the year that my father's sister, Myrtle, met and married a young WWI soldier from Wyoming who was stationed in Boston. I believe she and her husband moved to Wyoming that same year after his discharge. For the next several years she encouraged my father to move to Wyoming and to apply for a Government Land Grant called a "homestead". One thing that was keeping my father in Boston was that his father had died and his mother, at the age of sixty-five or so, had become an invalid and was almost completely bedridden.

My parents did apply for a homestead and immediately were granted one. It consisted of 640 acres near the town of Newcastle, Wyoming, and it already had an old, two-room cabin on it. Also, it was located in the same county as his sister's place. With what I believe to be immense courage, they packed all their belongings into a car and, along with my invalid grandmother, set out for a new life in Wyoming, on land they had never seen.

At this point in this story, I would like to acknowledge the incredible commitment my mother made to her marriage. From the first day and for most of the next twenty-five years, under hardships that are difficult to imagine, she took care of and waited on her invalid and bedridden mother-in-law. All this while she struggled to raise her own family and deal with the problems the Great Depression and War years heaped upon her.

For the next several years my father tried his hand at several ventures and jobs. He moved his family several times as well. First to Casper, Wyoming, then to California, back to Casper, then to Riverton, Wyoming, and finally back to Casper. It was the middle of the Great Depression of the 1930's, and these were very hard times for the family. We were about as poor as people get. My mother always said the very hardest time was when I was born on November 11, 1938 in Casper. That very week, my sister broke her arm, my father was laid off his job at an out-of-town construction project, and he could not come home because my sister had come down with scarlet fever. In those days, households were placed under quarantine for thirty days by the County Health Department. If he was to have gone home, he would have been placed under quarantine as well, and would not have been able to look for work.

We lived in an apartment attached to the rear of the store. During this period, my father became very active in the VFW, Masons, Shriners, and other groups, eventually holding most of the official offices of these organizations in Casper.

My father and mother continued to live in Casper during their retirement. After my mother died, my father moved to a retirement home in Denver, Colorado to be near my sister. My parents had four children and five grandchildren.

Of course, I am a member of the sixth generation of this Whitman family in North America. Like every generation, much of a person's history is also that of their parents and siblings. My sister wrote an article for her High School Reunion Scrapbook entitled "Washington Park" which paints a picture of our growing up in the 1940's better than I ever could. With her permission, I am making it part of this family history record.

I am very grateful to those ancestors who, so many years ago, took the time to write those names and dates in that family bible. I wonder if they ever thought about how it might cause a descendant like me to seek out his roots. 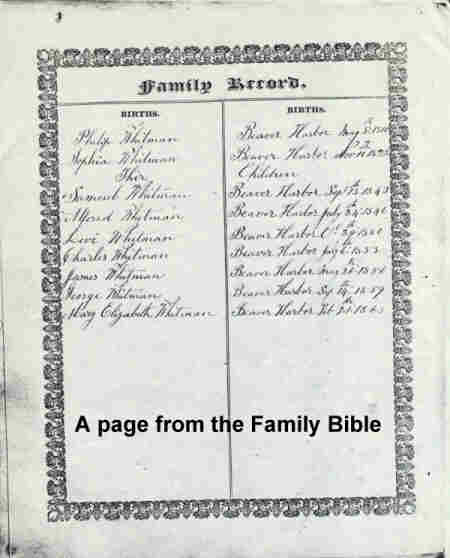 Well, time marches on, and more family history is made every day. I hope that some day my children will complete my generation's history. Also, I hope as a family tradition, the members of each new generation take the time to add to this history book, by reflecting on their own childhoods and telling a story or two about their parents.

Go to the Preface again

Read about Growing Up in Washington Park by Catherine Whitman Burlingame