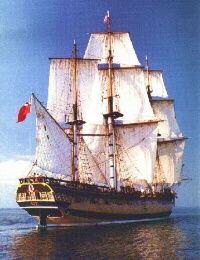 "All the past we leave behind,

We debouch upon a newer mightier world, varied world,

Fresh and strong the world we seize, world of labor and the march,

Massachusetts had been inhabited for about 3000 years by Aboriginals of the Algonquin nation. Diseases brought over by the first European settlers decimated the population, reducing it from approximately 30,000 to little more than 7,000. The Pilgrims were the most famous early European inhabitants of Massachusetts, having arrived in 1620. They set up a fairly democratic government in accordance with the famous "Mayflower Compact", which provided a basis for the stream of colonists arriving in subsequent years, including the Whitmans. Our redoubtable ancestors arrived about twenty years later in 1635 or thereabouts. The town of Weymouth where they settled, according to Farnham,

"Lies on the south side of a navigable stream called Fore River...it has ever had an intimate connection with Boston. The first attempt at a settlement there was is 1622, at which time a company from England had been sent out for the purpose. This attempt, owing to the hostility of the Indians, provoked by the improvidence and misdemeanors of the emigrants, proved unfortunate, and in 1622, was abandoned. In 1624 Capt. Robert Georges ...renewed the attempt and a settlement was commenced by emigrants from Weymouth, England, of good character and maintained, and, in 1633, the place was incorporated as a town. Its local situation secured to it many advantages, being conveniently accessible from the sea, and enjoying every facility for being supplied with the products of the ocean as well as of the land, and having the market of the metropolis close at hand." (Farnham, John Whitman of Weymouth, page 2)

The failed colony was the work of Miles Standish, notorious as the bashful suitor in Longfellow’s poem, "The Courtship of Miles Standish". This first attempt founded a colony named Wessagusset, but the name was later changed to Weymouth by settlers from that town in England. It was at this more sober, more successful enterprise that John Whitman arrived with high hopes in 1638.

John Whitman arrived, alone, in Weymouth sometime before December, 1638. Walt Whitman, in "Specimen Days" , states that he came over in the "True Love". He also gives his year of emigration as 1640. We know, however, that John was in Weymouth in December of 1638, because he was made "free" by Governor Winthrop at this time. To be made free was to be admitted to the rights and privileges of a citizen, including the right to vote for the Governor and members of the Assembly. Governor Winthrop had arrived at Salem, Massachusetts in 1630, bringing with him the prized charter of Massachusetts, establishing a self-contained English colony, governed by its own inhabitants. Winthrop soon moved to Boston and by 1640 the new colonists numbered 16,000 and included several Whitmans. The seal of the Massachusetts Bay Colony shows a Native American saying "Come Over and Help Us". The motto signifies the zeal for religious conversion of many of the colonists.

Why John left England for Weymouth Massachusetts can only be conjectured. The wisdom of the move, however, is quite clear. The winds of conflict were blowing strong in England. James "Divine Right" Stuart, was succeeded by his obstinate son Charles in 1625. Parliament, bolstered by the middle class, mainly Puritans, and Charles followers, the aristocracy and "the poorest of the poor", went to war in 1642. England was not a happy place. The Whitmans were in trouble on two counts: they were Puritans and they were middle class. They would not have escaped becoming caught up in the conflicts raging in the British Isles in the 1640s and 50s.

Rather than fall into this trap, John emigrated to the New World. After a short period, he was able to establish himself, and bring over his wife and six children by 1640. Three more children were born in America: Hannah in 1641, Zachariah in 1644, and Abiah in 1646.

John Whitman was appointed an ensign, which is to say a military officer, by the Governor, in 1645. His duties included the responsibility "to end small controversies," and decide all civil actions in the town of Weymouth up to the amount of twenty shillings. John was sent by the General Court of the State of Massachusetts as an envoy to the local natives of the Narrowgansetts, for which he was allowed expenses of four shilling per day "for his paynes". Had he remained in England he would probably have been drafted into Cromwell’s Parliamentary Army, with the distinct possibility of disastrous consequences for subsequent generations. Instead he was made a full and free citizen of the colony of Massachusetts, appointed an ensign, a military rank with duties similar to a Justice of the Peace, and a Deacon of the Church in Weymouth. He continued to act as Ensign until he was relieved of further duty on March 16, 1680, when he was seventy eight years of age. He held the post of Deacon until his death in 1692, at the comfortable age of ninety.

The family owned a farm just north of Weymouth, near the highway to Boston, running from the highway down to the Fore River. Farnham writes in 1889 that part of the dwelling house on the farm is 150 years old. If this is so, John lived there for at least the last dozen years of his life. It was built of wood, "two stories in front, facing the meeting house, and one in the rear towards the River, and well preserved with paint". Always prudent, the Whitmans. Weymouth records from 1642 describe the Whitman farm:

"Twenty and one acres in the west ffield (sic), fifteene of them upland and six of salt marsh, bounded on the east with a high waie (the road to Boston) on the west and north with a creeke, on the south with land of Walter Harris...."

The roll goes on to describe several more small plots of land scattered among creeks and swamps and neighbours plots. By 1663 he is listed as having sixty acres, quite a decent increase! Weymouth town records of sale of land indicate that John Whitman became a considerable land owner, buying and selling several plots of land in and around Weymouth.

At the conclusion of his account of John Whitman, his emigration from England, and his accomplishments in the New World, Farnham adds the following commentary:

"He was undoubtedly a worthy man. His enterprises had brought him to a new country, probably with but little if any estate. He had, like most adventurers into a new country, his own fortune to achieve. The wilderness was alone open to him. An undaunted resolution must have urged him forward. His wife and several children had been left in the country from which he had migrated - three thousand miles of ocean intervening between them. His only hope of again rejoining them, with emotion of unalloyed felicity, depended on his ability to carve from the wilderness the source of a comfortable subsistence. Affection on the one hand, and almost desperation on the other, stimulated his exertions. Joy and sadness must have alternated in his breast, as the idols of his affection, or the prospect before him, were uppermost in his mind. Years had elapsed before he could be allowed to realize that the day of anxiety and solicitude had passed away. In 1641, however, according to traditionary (sic), account, the measure of his felicity was made full be the arrival of his family, and their establishment on the venerated spot, in the town of Weymouth, where he had unremittingly toiled in anticipation of this consummation of his fondest hopes. There he would seem to have been trebly blessed with competency, offspring and length of days - his competency the fruit of industry, his offspring the gift of heaven and his length of days the reward of temperance and virtue.

In him his posterity have an example worthy of imitation. His virtues were not of the obtrusive kind, nor adapted to catch the popular admiration. He was, probably, incapable of exploits that would astonish the crowd; or, if he was, his ambition did not prompt him to the attempt. Many a man has been lauded to the skies for the tricks of a mere mountebank without one single virtue to recommend him. Nine tenths of the heroes of all times are of this order. Such is human nature, and so prone to the marvelous and to be dazzled with external show and pomp, and to be blinded by it, and utterly reckless of what is simple, amiable and really praiseworthy! But our Ancestor, who feared God and hated covetousness; who did good continually all the days of a long life; who, by honest industry and without offense to anyone nurtured and educated a large family, and fitted them to become citizens worthy of any country; who was an exemplar to all around him; who braved and endured hardships and privations few can realize; and finally who fulfilled every civil, religious and moral obligation, must not be forgotten by his numerous posterity. His virtues should be their virtues and his history should be deeply engraven on their minds. To reverence and venerate our ancestors would seem to be but an instinct of nature. At any rate, it is at the dictate of humanity, in every form of existence, from the most savage to the most civilized state, and so ordered for wise purposes. From veneration, imitation, if not emulation, will follow. Let us then cherish and not endeavor to extinguish this propensity. Let us honour our progenitors that our days that may be many in the land which the Lord our God has given us" (Farnham, pages 6 & 7)

Many of the colonists, John Whitman probably included, saw themselves as God’s chosen people who were going off to prove to the world that a country in which Puritan beliefs were practiced would succeed and be blessed. John Winthrop, first Governor of Massachusetts and the man who most likely recruited the Whitman brothers as colonists, said, "We shall be a city upon a hill, a beacon to humanity."

The colonists believed that church attendance and religious practice were cornerstones of a successful life. Education was very important, if for no other reason because it was important to be able to read and interpret the Bible, in the original languages if possible. Taking notes during sermons was encouraged. Family life was governed by norms which could best be described as benevolent patriarchy. We notice that the Whitman sons’ lives are described in as much detail as possible by the records on which Judge Whitman and later Charles Farnham drew for their accounts. The daughters are given little attention. This emphasis on religion as the cornerstone of life in Weymouth in the 1600s is reflected in the History of the Whitman Family written by Farnham.

The sentiments expressed in the passage quoted above are clearly Victorian, although little changed from the Puritan beliefs held by our ancestors; the virtues are carefully enunciated; there is no hint of doubt or weakness or (God forbid)character faults in our Ancestor. And indeed he may well have been fully as formidable a character as Farnham portrays. Certainly he managed to emigrate to a New World, bring his wife and six children safely ashore, establish a farm which was still in the hands of his descendants one hundred and fifty years later, and become a prosperous and respected member of the community of Weymouth. Three more children were born in the Weymouth, the last when John was forty four years old. He lived another forty six years. He certainly has my respect!

Authored by Brian Whitman, a columnist and book review writer from Ontario;
Copyright 1999; all rights reserved.

Brian Whitman succumbed to ALS and passed away September, 2001
Rest in Peace, my Friend